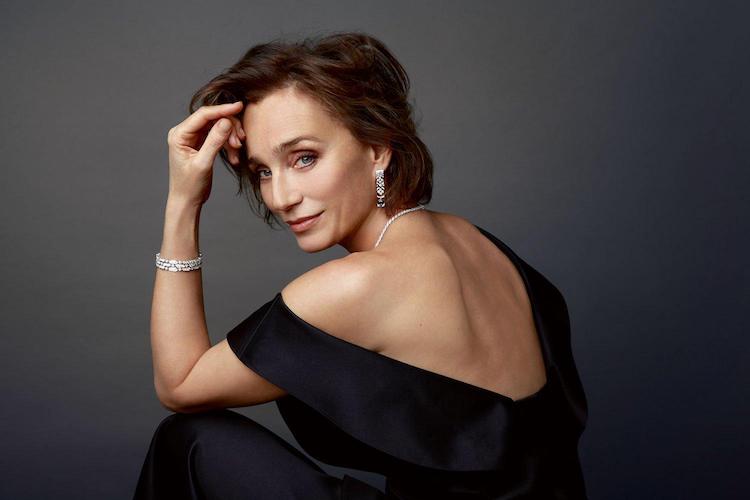 In our second installment of interviews from Netflix’s Rebecca, we ask Dame Kristin Scott Thomas to take us into the dark mind of an iconic character.

INDULGE: Tell us a little about you character…

KRISTIN: I play Mrs Danvers, the housekeeper. She’s been taking care of the house (when) Rebecca marries Maxim, and she feels quite possessive about it and the memory of Rebecca. She’s doing her very best to intimidate her. I think she’s automatically resentful of the person who has come to replace her beloved Rebecca, who, after all, she’s knowns since Rebecca was a child, and I think identifies very strongly with her.

KRISTIN: There may even be some kind of passion there that is not unrequited and probably encouraged by Rebecca. It’s less about Mrs. Danver’s obsession with her feelings towards Mrs de Winter (Lily James), less about the house, and more about Rebecca. The terrible secret for Mrs Danvers is that she didn’t know everything about Rebecca who had secrets from her, which is devastating to Mrs Danvers. Actually you feel quite sorry for her at that point.

INDULGE: Tell us about the ‘look’, how you reinvented the iconic role played by Judith Anderson.

KRISTIN: Mrs Danvers makes me think of some sort of supercharged first class air hostess! Working with Julian (Costume Designer, Julian Day) is always very, very easy for me. He understands my shape, what I like to wear and what reads on this body. The hair was more complicated to do because the look, the design, the fashion of the time — the physical pursuit that we were trying to get — was crying out for a hairdo that had already been used to great effect by Judith Anderson. We all thought the idea was to be absolutely impeccable and not have a hair out of place; that everyday she would apply her mask.

INDULGE: What was it like working with the cast?

KRISTIN: Armie Hammer is extraordinary because he is the matinee idol. He looks so perfect for this, and his stride is wonderful. The physical embodiment of Maxim is amazing! Ben (Director, Ben Wheatley) is very hands-off as far as acting is concerned. His composition, the framing, the lighting, the set…(the audiences) are going to be completely blown over by the visuals. And by Armie and Lily’s beauty. And by a very mysterious end…