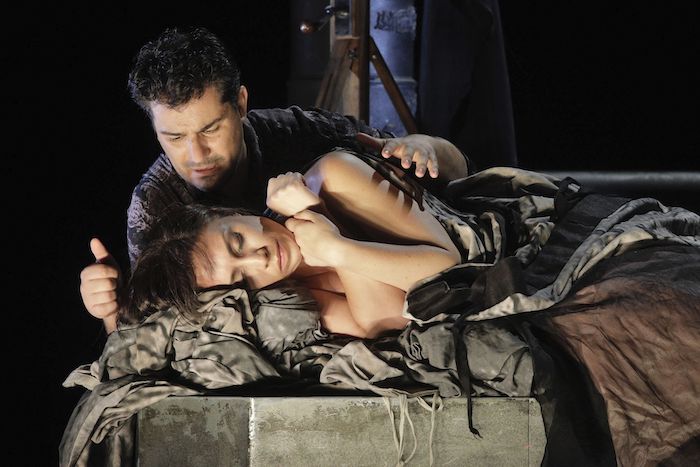 xSaimir Pirgu as Rodolfo and Marina Costa-Jackson as Mimi in LA Opera's 2019 production of "La Boheme."

Based on Henri Murger’s “Scenes de la vie de Boheme”, Giacomo Puccini’s “La Boheme” is one of his most recognizable and beloved operas. Directed by Barrie Kosky, this is an updated, more contemporary production of an opera that has it all. Youth, struggling artists, comedy, falling in love, breakups, reconciliations — and death by tuberculosis!

The bohemians of “La Boheme” are four carefree young men trying to make their mark in the artsy intellectual world of 19th century Paris. They are Rodolfo the writer (tenor, Saimir Pirgu, Cosi Fan Tutte, Gianni Schicchi), Marcello the painter (Kihun Yoon, Madama Butterfly, Tosca), Schaunard, the musician (Michael J. Hawk, Satyagraha, El Gato Montes), and Colline, the philosopher (Nicholas Brownlee, Tosca, The Pearl Fishers). They’ve got the gift of the artistic gab, but none of them knows where their next meal will come from, barely staying warm in a shabby Parisian attic where their camaraderie is as exuberant as their prospects slim.

The leading character among the bohemians is Rodolfo, who meets a frail seamstress named Mimi (Soprano, Marina Costa-Jackson, Pagliacci, Simon Boccanegra) living a lonely hand-to-mouth existence in a neighboring apartment. It’s a case of love at first sight, but Rodolfo casts her away due to his irascible, unfounded jealousy. Unbeknownst to him, Mimi is in poor health with tuberculosis.

There is also the spicy, secondary plot of a stormy love affair between Marcello and a free spirited, wanton girl named Musetta (Soprano, Erica Petrocelli, La Traviata, Satyagraha) who delivers one of the opera cannon’s greatest hits, “Musetta’s Waltz,” in the second act. Musetta, who never fails to elicit some comedic relief with Marcello, comes into her own in Act 4 when revealing her kindness to the dying Mimi.

Puccini’s lush, romantic score perfectly captures the simple joys and heartbreaking sorrows of the idealistic bohemians. Their camaraderie, conviction and passions, masterfully conveyed by an iconic score, make “La Boheme” easy to love and impossible to forget. Conductor James Conlon shines as the star of the evening with his flawless brand of musical arranging of the stunning music score.

La Boheme is playing at LA Opera through October 6th. Get tickets HERE.