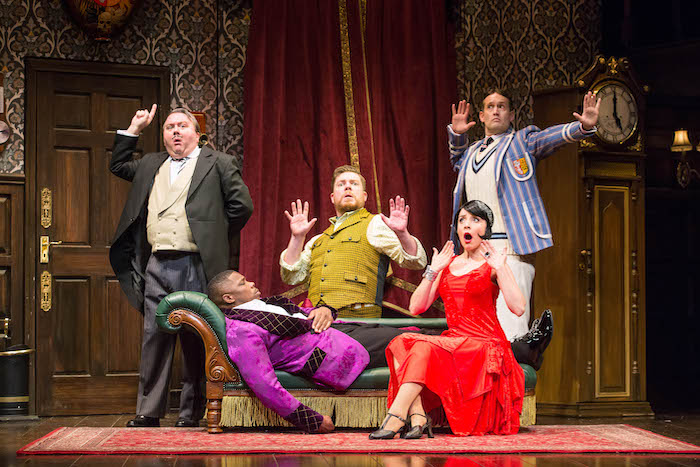 Directed by Matt DiCarlo and Co-written by Mischief Theatre company members Henry Lewis, Jonathan Sayer, and Henry Shields, The Play that Goes Wrong is a true rags-to-riches story for a production that started its life at a modest London venue, with only four paying members of the public at the first performance, and has gone on to play to an audience of over 2 million people around the world. The show has been translated into multiple languages and licensed for productions in over 20 countries, including China, Poland, Hungary, Greece, Israel, Spain, France, Italy, Scandinavia, Iceland, Brazil, Germany, The Netherlands, Belgium, Argentina, New Zealand, Uruguay, Turkey, Hong Kong, India, Singapore, the Philippines, and South Africa.

True to the title, everything that possibly could go wrong does go wrong in this play about a play — Cornley University Drama Society’s production of the 1920’s mystery “Murder at Haversham Manor.” Forget plot and character development; this two-act treat is all farce and choreographed chaos. Lines are forgotten or delivered in the wrong order, the scenery crashes all around them (quite spectacularly in the finale), and the actors veer between hyperbolical reactions and the utter failure to talk their way out of the bungling. Reminiscent of Noises Off, this is an unforgettable comedy wrapped around a totally forgettable drama.

CTGLA presents The Play that Goes Wrong at the Ahmanson Theatre through August 11. Tickets HERE.