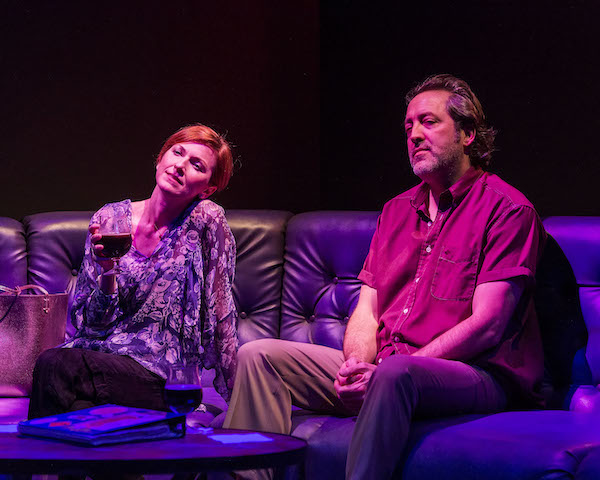 Angelenos (including James Franco and Bob Odenkirk) braved a rainstorm and daunting freeway treks to get to the Mark Taper Forum in downtown for the Opening Night of Pulitzer Prize winning playwright, and actor, Tracy Letts’ “Linda Vista” about a witty, acerbic divorcee grappling with a midlife crisis and his relationship with two women.

Dick Wheeler (Ian Barford), an embittered but strangely seductive 50 year-old moves into San Diego’s “Linda Vista” community, and ironically, his outlook is anything but linda, beautiful. He’s garrulous about paying alimony and child support, has given up on his dream of being a photographer and works in a metaphorically defunct camera repair shop, derides modern culture, and is rudely outspoken to his friends. Yet, all this is significantly ameliorated by his witt, his wry and self-deprecating sense of humor — a shtick that he’s been hiding behind his whole miserable life.

When a couple, Paul and Margaret (Tim Hopper, Sally Murphy), who appear be his only close friends, introduce Wheeler to a positive, sexy life-coach, Jules (Cora Vander Broek), it looks like the sun might finally break through for Wheeler. She seems to get him — “You’re like a turtle that doesn’t know he’s lost his shell.” Opposites attract, and Jules’ positivity (she claims to have a “masters in happiness”) looks poised to save Wheeler from his train-wreck of a life. But only temporarily.

Bound to his self-destructive nature, just when his relationship with Jules is maturing into something more significant, Wheeler goes into jerk mode. When his 26 year-old, pregnant, Vietnamese neighbor, Minnie (Chantal Thuy) shows up at his door, begging for refuge from her abusive boyfriend, Wheeler heartlessly ditches Jules. He has a history of betraying and abandoning people while proclaiming himself as a no-good loser, and the irony is that he repeats this while attempting to play savior to an equally scarred person.

This Steppenwolf Theatre production is directed by Dexter Bullard. Though it runs almost 3-hours, they fleet by astonishingly fast. Letts’ trademark writing is bitterly witty and tragically funny, enabling a formidable ensemble to shine so that even Wheeler’s workmates, the lecherous shop-owner, Michael (Troy West) and resilient employee, Anita (Caroline Neff) make an impact in just a couple of scenes. The revolving set by Todd Rosenthal seamlessly transports us from apartment to bar and camera shop, allowing for a performance flow that is reminiscent of one-take shots in a movie.

Linda Vista is playing through February 17th at the Mark Taper Forum. Get tickets HERE.