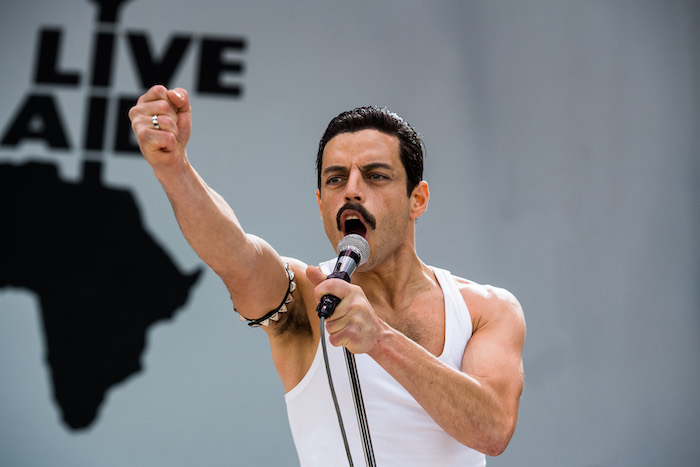 25 years after the death of Queen’s iconic lead singer, Freddie Mercury, a stellar biopic starring Emmy-winner Rami Malek redefines our impressions of him, and becomes a front-runner for the Oscar race. We caught up with Malek to go behind the scenes.

INDULGE: How nervous were you about stepping into Mercury’s shoes?

RM: At first it was shocking. When you set out to play Freddie Mercury, you think — how am I ever going to fill those shoes? I just attacked it as I would any other role. So I stripped out his achievements in terms of his performing — his ability to rule the stage, his singing, his piano playing — and found a very complicated man at the center, who was trying to discover his identity. That was something I knew how to tackle. If I could start there I would be able to have the initial building blocks that get you the confidence to do all those other things. We didn’t want an impersonation of Freddy, but rather to understand why he did what he did. So looking at all those performers and films and choreographers that influenced him was incredibly useful in getting to the heart of how he moved and performed.

INDULGE: Tell us about this “heart.” What do you think gets overlooked when it comes to an icon like him?

RM: Freddie was a fighter. It wasn’t easy being an immigrant in the UK in those days. He didn’t become a star immediately, he wasn’t an overnight success. He became one by fighting, by not accepting ‘no’, by not being negative, and by always fighting back from the knocks with something bigger and better. That’s what Queen managed to do so well in their music. Every time you thought you’d heard the best of Queen, a song would come along and blow your mind.

INDULGE: You’re also a fan of their music. Did you learn anything new through this journey?

RM: I knew that Queen was massive and Freddie Mercury was an icon and a hero to so many, but I don’t think I completely understood just how important he is to so many people across the world. Queen’s fan base is massive. I was always a fan of Queen and Freddie Mercury, but it was only when I started researching the band that I realized they began in the 1970s, when they all had long hair and black fingernails and wore outrageous outfits. I think most people identify Freddie Mercury as this crop-haired, mustachioed, tank top wearing muscular man who had a ton of bravado and machismo. It was astonishing to get to know the many versions of the very sweet side of him as well.

INDULGE: To what do you attribute Freddie’s magic?

RM: One thing about Freddie Mercury that’s absolutely undeniable is his magnetism. When he was on stage holding that half mic, or sitting at the piano, he feels capable of anything. What was magical about him was the exchange with everyone in the audience where everyone was allowed to feel the same thing – he could reach you as if you’re the only person in the room – and it’s that exchange that makes him one of the most unique and remarkable and revolutionary artists of our time or any time.

INDULGE: What do you hope people take away from this movie?

RM: I hope that everyone leaves the film as inspired by Freddie’s story as I am, feeling confident, feeling inspired. That they know it’s okay to be who you are. I hope that they can sing as loudly as he can and own every truth of theirs, and not feel like they have to hide anything, but that they can just be, and enjoy exactly who they were meant to be.