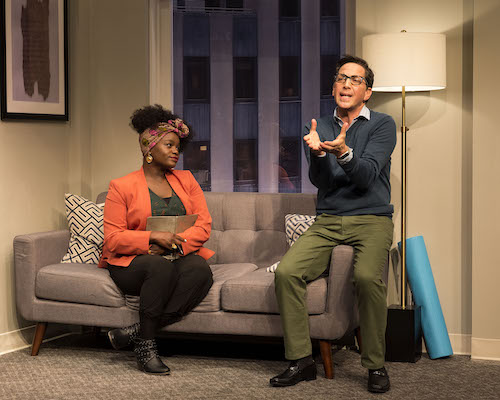 Shoniqua Shandai and Dan Bucatinsky in the world premiere of “Quack” at the Kirk Douglas Theatre. Photo by Craig Schwartz.

Playwright, Eliza Clark (The Killing) uses humor to explore a host of relevant issues for our challenging times —  the opioid epidemic, crush diets, health fads, infidelity, and crushed dreams. And then there’s the world of doctors-turned-celebrities, thanks to the daytime TV’s wellness industry which attracts millions of unconditional, dotting viewers who hang on every word the gurus say.

Dr. Irving  Baer (Dan Bucatinsky) is such a celebrity doctor. He’s sold out to the glitz and glamor, and no longer abides by the altruistic motives that made him become a healer. He dishes advice to his insatiable fans on topics ranging from dieting to beauty tips, and they lapp it up hungrily. But then, he commits the fatal error of sharing his opposition to children’s vaccinations, which results in the death of some children.

In steps sassy reporter, River (Shoniqua Shandai) — a “former fat” who has recently lost 206 pounds through dieting and exercise, and thanks to her new (dubious) book, is joining the celebrity ranks, too. When she unleashes an exposé on the life of Dr. Baer, she jeopardizes his career, and sets him up as a rival obsessed with turning the tables. The hunter now becomes the hunted as Baer spends every waking minute unearthing every minute detail of her life (including, hilariously, printing all her tweets) in order to destroy her.  Stretching about two-hours, the play feels a bit “talky”, but the humor is intact, and the topics hard-hitting. Jackie Chung shines as Dr. Baer ‘s assistant, Kelly, in a restrained, honest performance. And kudos must be given to set designer, Dane Laffrey who has created multiple versions of the Dr. Baer’s office on a carousel that seamlessly switches to reflect scene changes.