Los Angeles native, Nyesha J. Arrington’s restaurant has taken over the space once occupied by the Santa Monica Yacht Club (whose passing we mourn). Arrington, who was featured on Bravo’s Top Chef and worked alongside Josiah Citrin at the wildly popular, fine-dinning restaurant, Mélisse dials it down to casual elegance and ecclectic. The ambiance is convivial and unfussy, and the food draws inspiration from global culinary traditions and its ingredients from the nearby Santa Monica farmers market (so look forward to a seasonally changing menu). 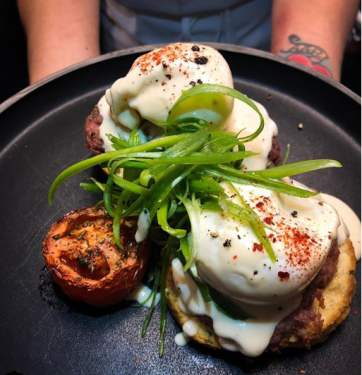 Our sampling of Native took place during dine L.A. restaurant week, and while some of the dishes may not be on their current menu, they attested to Arrington’s culinary verve. A superbly balanced, flavorful, American Grand Prix cocktail made with bourbon, amaro and pineapple gomme, and garnished with edible flowers kicked off a round of cocktails, but for those who prefer wine, they also have a satisfying selection of French and California offerings. Beer lovers won’t go thirsty either.

“To Start” we oohed-and-ahed over the heirloom tomato and peach salad served with burrata, and followed this with the succulent lamb meatballs from the “And Then” section. A prix fixe item of Korean fried chicken was cooked to perfection with lightly battered, crispy skin and moist meat. While the dessert — roasted banana with dulce de leche and toffee crumble — didn’t live up to the decadence this condensed milk concoction generally conjures, it did spare us from post-dinner guilt.