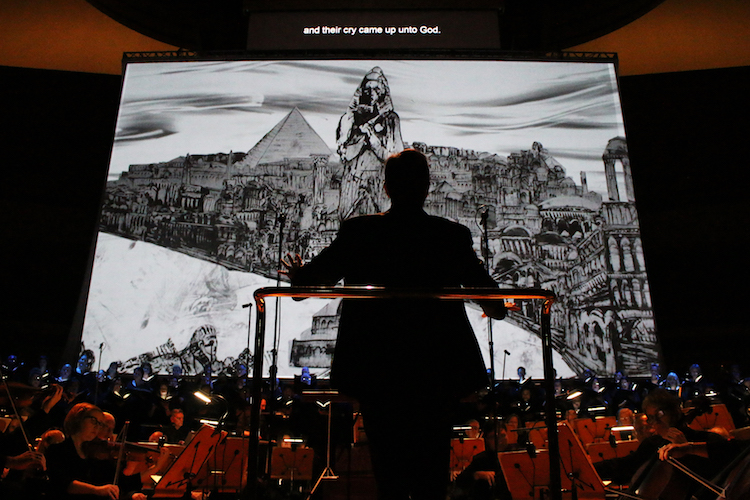 Handel's Israel in Egypt. Grant Gershon conducting against a backdrop by Kevork Mourad.

When it first premiered at the King’s Theatre in London, on April 4, 1739, Israel in Egypt was per se an important transitional phase in Handel’s career, who had previously scored opera (his first hit was Rinaldo). But who would imagine that more than almost 280 years later, on February 11, 2018, this biblical oratorio that tells the drama of the Exodus, would still feel so contemporary, given the world’s current refugee crisis?

This theme becomes even more significant thanks to brilliant Syrian-Armenian artist, Kevork Mourad, who partners with the Master Chorale to produce a unique semi-staged, multimedia production. “This story is very familiar to me because of my Armenian background. My ancestors were forced to leave their homes 100 years ago and were welcomed by Syrians. And now this has happened to the Syrians: almost half the population has been forced to leave their homes. So there are three layers to this story for me”, says Mourad. Mourad’s process involves a technique of live painting which is projected onto a large screen and its fusion with computer-animation.