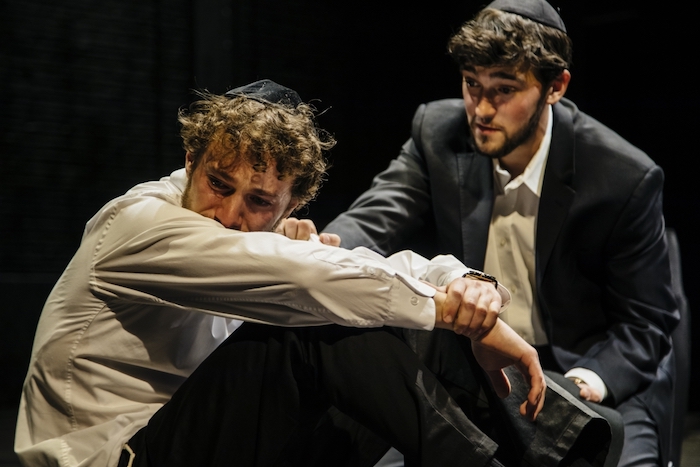 Set in 1990’s New York, TRAYF is named after the Yiddish word for “non-kosher” or “forbidden.” The play predominantly focuses on the double life of 19-year-old Zalmy, a loyal foot soldier for his rabbi and Orthodox Jewish community by day, and a free- spirited roller skating, secular club kid at night. Zalmy (Ian Eskenazi, Sing Street) and Shmuel (Ben Hirschhorn, Practice Funeral) are two childhood best friends, excited to get behind the wheel of their newly acquired RV. What makes them different from most American nineteen-year-olds with a new set of wheels is that their vehicle is a “Mitzvah Tank”, a van that is a mobile educational and outreach center dedicated to bring secular Jews back into the traditional flock.

Shmuel, the more traditional and sheltered of the two, listens only to religious music and has never spoken to a woman other than his mother and sister. Zalmy is more adventurous, tempted by secular music and the world outside their Brooklyn Orthodox community. For Zalmy and Shmuel, their job is literally God’s work. But they’re not very good at it, spending more time gabbing about music, mix tapes versus albums, and matchmaker-initiated dates. Zalmy is excited to speak about how, on a recent trip to L.A., he spotted Elton John at a hotel – Shmuel not only doesn’t know who that is, but says he closes his ears to secular music because when one listens to any music, “the soul of the author enters the room.” To him, such music is as “TRAYF” to listen to as pork is to eat.

In comes Jonathan (Garrett Young, Chicago Fire), an aspiring music producer from Manhattan, and their only “recruit.” Though raised Catholic, he’s just discovered that his recently deceased father had hidden the fact that he was a child refugee from the Holocaust. Now he desperately wants to connect with his “Jewish soul.” Initially Jonathan’s education is a joint project, but Zalmy in particular bonds with him, lured by the outside world. Jonathan in turn envies the sense of family, community, and religious identity in Zalmy’s. The equilibrium of friendship is inevitably disrupted because, as in many relationships two’s company, but three’s a crowd.

Writer Lindsay Joelle smartly anchors the play in the specific details of the Orthodox Jewish world yet poses universal themes. Everyone can identify with the challenges of maintaining a relationship when friends are growing up and heading in different directions. The play also explores the importance of commitment versus tolerance, a message which feels especially appropriate today. Both friends explore their characters with youthful excitement and idealism as well as the deep friendship they can have even when they find themselves on opposite sides of an essential argument, not just because they have reached different conclusions, but because they realize they have different questions.

The cast is superbly talented. Ben Hirschhorn’s heartbreaking portrayal of Shmuel is the heart of the play, giving the character not just a sweet simplicity, but surprising precociousness. Ian Eskenazi breathes life into his character with effortless charm as the bright eyed optimist Zalmy. Garret Young makes Jonathan a charismatic figure and convincingly handles the play’s biggest shift in character – a shift that has human costs, a point well made by Jonathan’s girlfriend Leah played by Louisa Jacobson (fresh from her success in HBO’s The Gilded Age). Though entering late into the play, her gravitas — a combination of incisive intelligence and real-world experience as a non-practicing Jew — lends the story some real edge.

TRAYF at the Geffen Playhouse through April 10th, 2022. Tickets HERE.