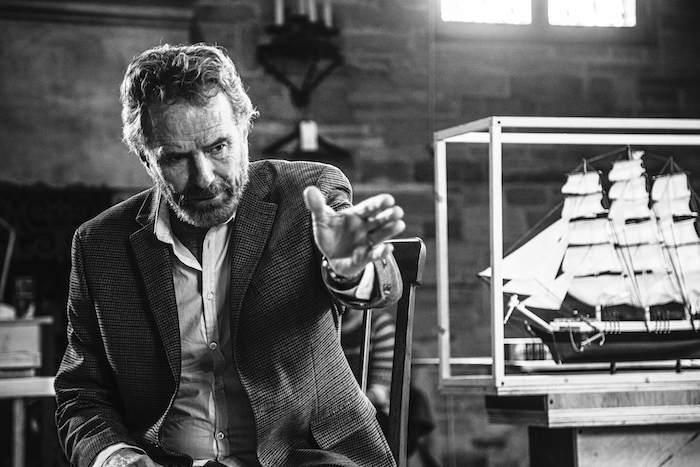 Bryan Cranston in rehearsals for Power of Sail at Geffen Playhouse. Photo by Jeff Lorch.

Harvard University has turned into a tinderbox. A campus protest is brewing outside the office of Professor of History, Charles Nichols (a committed and engaging Bryan Cranston, Breaking Bad, Malcolm In The Middle) because he has invited an outspoken white nationalist as a guest speaker to the college. A self-proclaimed free-speech absolutist, Nichols strongly believes all people should have the right to speak their mind, including hate speech. But not everyone, especially the woke, feel this way and draw the line at bigotry and racism. Sounds familiar? That’s because the genius of this play is how it reflects our zeitgeist, the conflicts and varied understanding of our first amendment rights.

Apparently, Nichols hates “hatred” in any form and really wants to annihilate this polarizing figure on a live debate. At least that’s his rationale to Dean Amy Katz, played by the always wonderful Amy Brenneman (Judging Amy, Romeo and Juliet). There’s a lot of thought-provoking, deeply compelling dialogue that presents both sides of the argument. Impressively erudite, the play is constructed almost in the form of a debate, as several of Nichols’s former and current students raise questions about the event and share their perspectives on everything from white privilege to anti-Semitism. In time, we discover there’s much more than altruism propelling Nichols, and also end up exploring the torments of struggling writers and the lengths to which they will go to achieve the recognition of which they feel cheated.

Covering an array of heavy socio-political issues, Power of Sail offers an edge-of-your-seat experience. It’s the perfect combination of meaningful and timely topics and pure entertainment. Paul Grellong’s script, occasionally a little on the nose, utilizes a time-fluid structure that works well, allowing some revelations to truly pack a punch. Displaying a marvelous brand of subtlety and deadpan humor, Seth Numrich (War Horse, Homeland) is brilliant as Lucas Poole, Nichols’s current golden boy and PhD candidate who is up for a very competitive fellowship and might just not be who he appears to be. This play brings up a lot of relevant questions, some of them disturbing, some of them more philosophical — all of them worth examining.

The Power of Sail is playing at the Geffen Playhouse through March 20th. Tickets HERE.