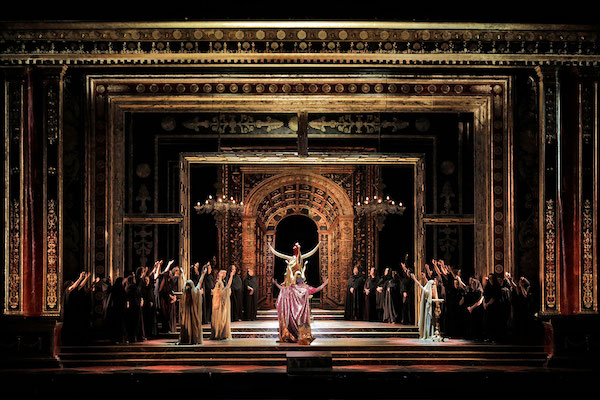 Lavish sets are a feature of LA Opera's 2019 production of "The Clemency of Titus." (Photo: Cory Weaver / LA Opera)

One of Mozart’s later works, La Clemenza di Tito, was essentially commissioned as a propaganda piece to commemorate the coronation of Emperor Leopold II in Prague in 1791. Written on a tight deadline (rumored to be just 18 days) it’s about the merciful Roman Emperor Titus (Tito) circa 79, and based on an existing libretto by Pietro Metastasio, later reworked by Caterino Mazzola. The opera was not always so obscure. In fact, after the hit premiere, it turned out to be one of Mozart’s most popular offerings. But time hasn’t been so kind, and more than 200 years later, we are excited for this breathtaking resuscitation at the L.A. Opera.

The complex story of friendship and revenge is made remarkably accessible, even humorous, thanks to the subtitles. Vitellia (Grammy-winner, Guanqun Yu) feels spurned by the Emperor Titus (Russell Thomas) and convinces his best friend, Sesto (Elizabeth DeShong) (who happens to be in love with her) to assassinate the Emperor. By the time Titus, having flitted through his choices, arrives at the decision to propose to Vitellia, the die has been cast, and a complicated plot to vanquish both him and the city of Rome is already underway. By the end of the second act, the Emperor’s famed “clemency” is tested to the limits as he weighs the path of compassion against one of revenge.

The opera has an impressively diverse cast. Women, in an inadvertent nod to the “Time’s Up” movement, dominate this gripping opera once performed entirely by men. Chinese Soprano, Guanqun Yu as the vengeful manipulator Vitella is as fiery as the destruction she causes. Mezzo-Sopranos, Elizabeth DeShong as Sesto, and Taylor Raven as his friend, Annio, are spellbinding, especially considering that they are playing roles originally performed by castratos (men who were castrated to make sure they never reached maturity, and maintained their high vocal register). African American tenor, Russell Thomas (who we also saw in LA Opera’s “Tosca”) demonstrates why Domingo has praised him as “one of the premiere tenors of our time.”

Director and designer, Thaddeus Strassberger gives us lavish sets adorned with the classical art of Sir Lawrence Alta-Tadema; his transition from the edenic beauty of happier times to the hellish, when Rome is in flames, is startling. Costume Designer, Mattie Ulrich drapes the ensemble in rich, colorful refinery, which serves the production’s opulent approach. High stakes and grandeur are the bedrock of opera, and L.A. Opera’s “The Clemency of Titus” bears these responsibilities on its shoulder plates majestically.

L.A. Opera’s The Clemency of Titus is playing at the Dorothy Chandler Pavilion through March 24th. Get tickets HERE.