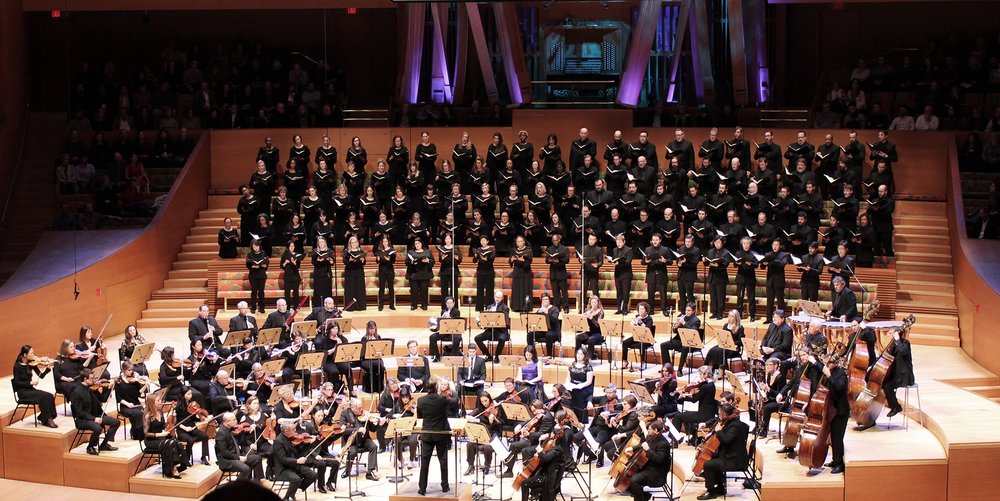 John Adams has said in interviews that Les Noces is one of his favorite pieces of music, and like Stravinsky, Adams’s work pushes boundaries, both musical and political. In the first half, the Los Angeles Master Chorale reveled in pieces from Adams’s The Gospel According to the Other Mary, The Death of Klinghoffer, A Flowering Tree, Doctor Atomic, and Adams’s monumental first opera, Nixon in China.

Artistic Director Grant Gershon presented the selections with piano arrangements, instead of the usual orchestral accompaniment.  Although I missed Adams’s complex orchestral scoring, it was easier to focus on the Chorale which sang each selection with extraordinary clarity and personality.  The Chorale continues to be a marvel, in their ability to truly sing as one voice. Gears shifted in the second half with Stravinsky’s Les Noces (or “The Wedding”).  Scored for soloists, chorus, percussionists and four pianos, Les Noces depicts a Russian peasant wedding with shifting rhythms and wild, wooly singing.  The Master Chorale’s performance was vivid, spirited and at the right times, deafening.

Special mention must be made for the four virtuoso pianists, Gloria Cheng, Lisa Edwards, Bryan Pezzone and Vick Ray who rose to the demands of Stravinsky’s challenging score. Stravinsky’s Les Noces was performed on Sunday, March 26 at Walt Disney Concert Hall, by the Los Angeles Master Chorale under the direction of Grant Gershon.