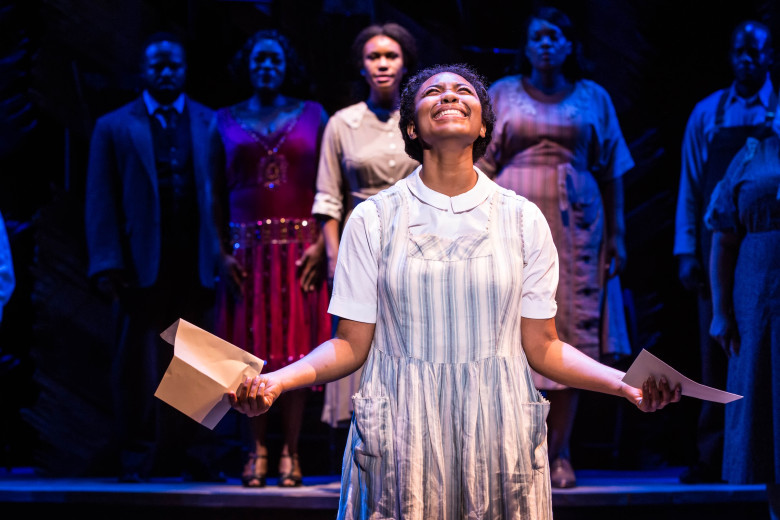 Adrianna Hicks (Celie) with other cast members from “The Color Purple.” Photo by Matthew Murphy.

Although snubbed by the Oscars, Steven Spielberg’s film adaptation of Alice Walker’s Pulitzer Prize-winning novel, The Color Purple, remains one of Hollywood’s most unforgettable movies, a seriously hard act to follow. Yet, Director, John Doyle’s revival of the Tony Award-winning musical at the Hollywood Pantages manages to shine independently of both the source material and film, thanks in no part to the stellar cast and an infectious soundtrack fusing Jazz, Blues, Ragtime and R&B.

The heart-wrenching story of “ugly” Celie Johnson who suffers both familial and marital abuse — rape by her father, the loss of her babies, separation from her sister, a form of spousal slavery — rests on the able shoulders of Adrianna Hicks. Set in the 1930s, Celie’s struggle to maintain strength, respect and hope in the most debilitating of circumstances is a rallying cry for women all over, especially in our #metoo and #nomore era.

Along the way, Celie finds comfort, encouragement and moments of tenderness with either her stepson’s wife, the rambunctious Sofia (Carrie Compere) or her husband’s mistress, the sizzling performer, Shug Avery (Carla R. Stewart). To say that Compere’s Sofia and Stewart’s Avery shine brightest would be an understatement; together, this powerhouse duo with pitch-perfect voices and show-stopping performances make the revival soar. Sofia’s “Hell, No!” is a rousing yet hilarious anthem for women and sisterhood, and Avery’s “Push da Button” sets the stage ablaze with sass and sexuality.

Doyle’s staging and set design are refreshingly spare but effective. There are no curtains, enabling the cast to simply walk up on stage with declarative pride. The backdrop consists of wooden chairs attached to the wall, and chairs are also used as props. Where minimalism can sometimes feel deficient and even pretentious, here it feels just right, serving rather than competing with the formidable cast.

“The Color Purple” is playing at the Hollywood Pantages through 6/17. Tickets HERE.